Today I am pleased to have been a part of this blog tour! Dyed and Gone by Beth Yarnell!!

Dyed and Gone
by Beth Yarnall

Synopsis
Hairstylist Azalea March is looking forward to a wild weekend in Las Vegas with her friends. Oh, sure, they’re supposed to be there on business, attending the biggest hair show on the west coast, but that doesn’t mean they can’t have a little fun. But fun quickly turns to drama. On the first morning of the show, Dhane, the biggest celeb of the hair-styling world, is found dead. As it urns out Azalea’s friend, Vivian, not only knew Dhane, but the tale she weaves of how they met is faker than a showgirl’s uh… assets. When Vivian confesses to the murder and is arrested, Azalea knows there’s no way she could have done it and suspects Vivian may be trying to protect someone. But who?
Azalea now has to convince Alex, the sexy detective from her past, to help her prove Vivian’s innocence and comb through clues more twisted than a spiral perm. But the truth is stranger than anything found on the Las Vegas Strip, and proving Vivian’s innocence turns out to be more difficult than transforming a brunette into a blonde.

my review:
I had a great time reading this book. The characters are fun and the story was great. Well written and I love how captivated you were from the beginning.  Azalea is taking a fun trip to Vegas for a hair convention. She thinks it will be a great time to relax and take a fresh start so when a murder takes place and  her friend Vivian is now the main suspect, Azalea's getaway just got a whole lot worse. She has to find out who the killer is before it is to late. I enjoyed reading this and look forward to the next one. 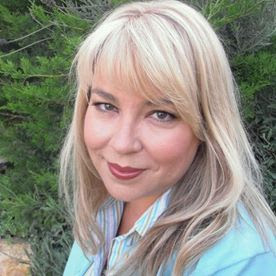 About This Author
Best selling author, Beth Yarnall, writes romantic suspense, mysteries and the occasional hilarious tweet. A storyteller since her playground days, Beth remembers her friends asking her to make up stories of how the person ‘died’ in the slumber party game Light as a Feather, Stiff as a Board, so it’s little wonder she prefers writing stories in which people meet unfortunate ends. In middle school she discovered romance novels, which inspired her to write a spoof of soap operas for the school’s newspaper. She hasn’t stopped writing since.
For a number of years, Beth made her living as a hairstylist and makeup artist and co-owned a salon. Somehow hairstylists and salons always seem to find their way into her stories. Beth lives in Orange County, California with her husband, two sons, and their rescue dog where she is hard at work on her next novel.
Author Links
Website: http://www.bethyarnall.com/
Blog: http://www.bethyarnall.com/?page_id=2345
Twitter: @BethYarnell
Facebook: http://www.facebook.com/BethYarnallAuthor
Goodreads: http://www.goodreads.com/author/show/6431701.Beth_Yarnall
Newsletter: http://www.bethyarnall.com/?page_id=2639
Book Links
Goodreads: https://www.goodreads.com/book/show/17978243-dyed-and-gone
Amazon Buy Link: http://amzn.to/1ne07CE
Barnes & Noble Buy Link: http://bit.ly/1lzlIY3
EP Book Link: http://bit.ly/1ne0E7J

Have you read this book? Say hi to Beth and tell us what you think.