Daphne Martin stopped by for a visit. The newest book killer wedding cake by Gayle Trent was released on June 20th. 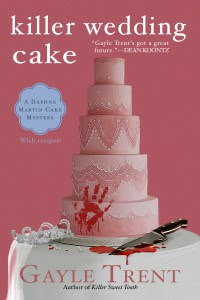 Daphne Martin’s wedding to Ben Jacobs is only a couple of weeks away. An award-winning cake decorator, Daphne is busy designing their wedding cake. Her twin nephew and niece, Lucas and Leslie, are excited about being in the wedding party. And Daphne’s brother-in-law Jason is planning a bachelor party for Ben. Everything is going beautifully until Daphne’s ex-husband Todd shows up. Just released from prison after serving a sentence based on his shooting a gun at Daphne, Todd comes to Brea Ridge to profess his undying love for her.

Despite Daphne’s attempts to make Todd leave town, he insists on hanging around to reconnect with people he used to know. When he’s found murdered, Daphne finds herself at the center of the investigation. Now she must track down Todd’s killer before she becomes the next victim. Can she still make it to the church on time?


This was a fun read. Daphne is in the process of planning her wedding as well as making her cake for it. Her life is busy and about to get busier when a murder takes place and puts a twist in her plans. This fast- paced mystery will have you on the edge of your seat guessing until the end. I enjoyed this read and am looking forward to the next one.

As some of you may know, I have two series (the Daphne Martin Cake Mystery series and the Myrtle Crumb series) set in fictional towns in Southwest Virginia. [I’ll have another one soon—a southern café mystery series—under the name Gayle Leeson for NAL/Penguin. But that’s a story for another blog tour. ;) ] Why do I write so much about Southwest Virginia? Because that’s where I’m from.

For the first five or six years of my life, I lived in a tiny town called Clinchburg, Virginia. Our family lived near the top of a hill, and my paternal grandparents lived directly across the road from us. There were three or four houses farther up from us, but I firmly believed that beyond the fields of that dead-end road was…well…nothing. It was the end of the world. It was beautiful—lush hills, maples, pines, daisies and goldenrod as far as the eye could see—but the road ended. There was nowhere else to go from there, at least, as far as my four-year-old mind could reason.

Southwest Virginia is rich in history. From the Native American tribes who roamed the region to the Civil War soldiers who fought battles here, there are lots of tales—yes, some are ghost stories—to be told. One of my fondest memories is slipping into the kitchen and listening to the adults relay stories in hushed tones. There was the legend about the haunted house where the most stalwart man in town swore that while out hunting one night, he shined a light in the window and saw blood running down the walls. The grownups laughed about the relative who kept a still and was always on the watch for revenuers. And they marveled over how they made it through some of the hard times they suffered growing up.

One horrible yet mesmerizing story I heard over and over again was of the multiple murder that happened one summer when my parents were children. A farmhand wanted to borrow his employer’s car. When he was refused, he killed all but one member of the family with a post hole digger. The survivor was able to barricade herself in a store building that was on the property. It was a gruesome tale to hear growing up, and without exception, I still shudder as I drive by the property where the incident occurred.

There’s also a lot of character—and a lot of characters—in Southwest Virginia. Some of the quirky secondary characters in both the cake decorating series and the southern café series (coming soon!) are composites of some of the people I’ve known or, at least, met. While some of those composites are likely skewed by a child’s memories and overactive imagination, they are based on fact. In the upcoming café series, for example, I have a character that has a raccoon visit her every evening expecting her to give it a biscuit. That character came to life after a woman who lives near my mother-in-law told me that she had a raccoon visit every evening at dusk. He wouldn’t leave until she gave him a biscuit. I thought that anecdote was too cute not to work into a book. If you engage people and listen to their tales, you’ll hear all kinds of book worthy snippets.

So when you put it all together—beauty, rich history, and interesting characters—is it any wonder why Southwest Virginia is so easy to write about? 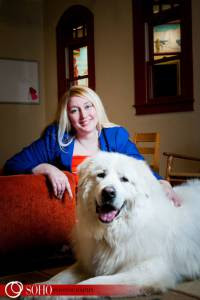 Gayle Trent (and pseudonym Amanda Lee) writes the Daphne Martin Cake Decorating series and the Embroidery Mystery series. The cake decorating series features a heroine who is starting her life over in Southwest Virginia after a nasty divorce. The Embroidery Mystery series features a heroine who recently moved to the Oregon coast to open an embroidery specialty shop.


Giveaway:Leave a comment by 12 am eastern time on August 10th for a chance to be entered in to win an e-copy of Killer Wedding Cake. Winners will be notified within 48 hours after the giveaway closes and will have three days to respond after being contacted or another winner will be selected. Make sure you check you Spam folder.
at August 07, 2015