Blog Tour- A Scone to Die For by H.Y. Hanna

I am delighted to be part of this blog tour. A Scone to Die For by H.Y. Hanna was released on January 18th. A First in Series. 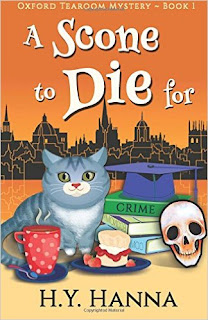 FIRST IN A NEW SERIES!

When an American tourist is murdered with a scone in Gemma Rose's quaint Oxfordshire tearoom, she suddenly finds herself apron-deep in a mystery involving long-buried secrets from Oxford's past.
Armed with her insider knowledge of the University and with the help of four nosy old ladies from the village (not to mention a cheeky little tabby cat named Muesli), Gemma sets out to solve the mystery--all while dealing with her matchmaking mother and the return of her old college love, Devlin O'Connor, now a dashing CID detective.
But with the body count rising and her business going bust, can Gemma find the killer before things turn to custard?
(*Traditional English scone recipe included)

This Debut book in a brand new Tea series will have you craving more. The characters are well developed and charming. The story line keeps you moving right along as you try to figure out who the killer is before the strike again. Meet Gemma Rose, the now owner of the Oxfordshire Tearoom and the delectable scones that they serve. When an American man is found dead with one of her scones in his mouth all eyes are on Gemma and her crew as suspects. Gemma is determined to clear their names and get back to business. This is a great read and once you stop you will not want to put it down. The author has written the story so well that you feel like you are right there in the midst of the tearoom. Tea, scones, that are so mouthwatering and murder, what more could you ask for

I never thought I’d end the week facing an American with a sharp knife.
It started normally enough, with the usual influx of tourists and visitors to our tiny Cotswolds’ village of Meadowford-on-Smythe. Filled with winding cobbled lanes and pretty thatched cottages, Meadowford was like a picture-perfect postcard of rural England. But quaint and gorgeous as the village was, it would probably never have got much notice if it hadn’t sat on the outskirts of the most famous university city in the world.

Over nine million tourists came to visit Oxford each year, and after they’d posed for photos in the college quadrangles and wandered reverently through the cloisters of the oldest university in the English-speaking world, they drifted out into the surrounding Cotswolds countryside. Here, they would coo over the quaint antique shops and village markets, and look forward to rounding everything off with some authentic English “afternoon tea”.

That’s where I came in. Or rather, my new business: the Little Stables Tearoom. Offering the best in traditional English refreshments, from warm buttery scones with jam and clotted cream, to home-made sticky toffee pudding and hot cross buns, all served with fragrant Earl Grey or English Breakfast tea—proper leaf tea—in delicate bone china… my little tearoom was a must-stop on any visitor’s itinerary.

Well, okay, right now, my little tearoom was more of a “must go next time”—but we all have to start somewhere, right? And so far, things were looking pretty promising. I’d opened three weeks ago, just at the beginning of October and the start of the Michaelmas Term (a fancy name for the first term in the school year; hey, this is Oxford—at least it wasn’t in Latin) and I’d been lucky to catch the end-of-the-summer tourist trade, as well as the flood of new students arriving with their families. My tearoom had even got a write-up in the local student magazine as one of the “Top Places to Take Your Parents” and looked set on its way to becoming a success.

And I desperately needed it to succeed. I’d given up a top executive job in Sydney—much to the horror of family and friends—on a crazy whim to come back home and follow this dream. I’d sunk every last penny of my savings into this place and I needed it to work. Besides, if my venture didn’t become profitable soon, I’d never be able to afford a place of my own, and seriously, after being home for six weeks, I realised that moving back to live with your parents when you’re twenty-nine is a fate worse than death.

But standing at the counter surveying my tearoom that Friday morning, I was feeling happy and hopeful. It was still an hour till lunchtime but already the place was almost full. There was a warm cosy atmosphere, permeated by the cheerful hum of conversation, the dainty clink of china, and that gorgeous smell of fresh baking. People were poring over their menus, happily stuffing their faces, or pointing and looking around the room in admiration.

The tearoom was housed in a 15th-century Tudor building, with the distinctive dark half-timber framing and daub-and-wattle walls painted white. With its steeply pitched thatched roof and cross gables, it looked just like the quintessential English cottages featured on chocolate box tins. Inside, the period charm continued with flagstone floors and thick, exposed wood beams, matched by mullioned windows facing the street and an inglenook fireplace. It hadn’t looked like this when I took it over. The last owner had let things go badly, due to a combination of money troubles and personal lethargy (otherwise known as laziness), and it had taken a lot of effort and dedication—not to mention all my savings—to restore this place to its former glory. But looking around now, I felt as great a sense of achievement as I had done the day I graduated with a First from that world-famous university nearby.


I scanned the tables, noting that we were starting to get some “regulars” and feeling a rush of pleasure at the thought. Getting someone to try you once—especially when they were tired and hungry and just wanted somewhere to sit down—was one thing; getting them to add you to their weekly routine was a different honour altogether. Especially when that honour was handed out by the residents of Meadowford-on-Smythe who viewed all newcomers with deep suspicion. 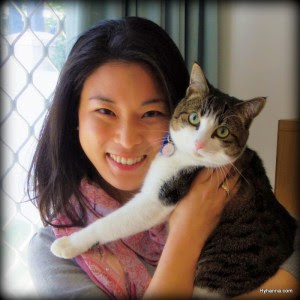 
H.Y. Hanna is an award-winning mystery and suspense author, who also writes sweet romance and children’s fiction. After graduating from Oxford University with a BA in Biological Sciences and a MSt in Social Anthropology, Hsin-Yi tried her hand at a variety of jobs, before returning to her first love: writing. She worked as a freelance journalist for several years, with articles and short stories published in the UK, Australia and NZ, and has won awards for her novels, poetry, short stories and journalism. A globe-trotter all her life, Hsin-Yi has lived in a variety of cultures, from Dubai to Auckland, London to New Jersey, but is now happily settled in Perth, Western Australia, with her husband and a rescue kitty named Muesli. You can learn more about her (and the real-life Muesli who inspired the cat character in the story) at: www.hyhanna.com.

Giveaway: Leave a comment and email below for a chance to win an E-Copy of A Scone to Die For Giveaway will run until Monday February 8th @12 AM EST. Good Luck!