I am thrilled to be on this blog tour. Book two in a Webb's Glass Shop Mystery- Shards of Murder by Cheryl Hollon was released on February 23rd. 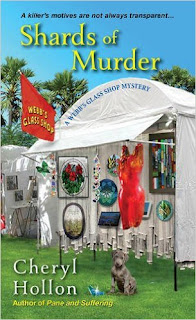 When a glass-making competition turns deadly, glass shop owner Savannah Webb must search for a window into a criminal’s mind…

As the new proprietor of Webb’s Glass Shop, Savannah has been appointed to fill her late father’s shoes as a judge for the Spinnaker Arts Festival, held in downtown St. Petersburg, Florida. With her innovative glass works, the clear winner is Megan Loyola, a student of Savannah’s former mentor.

But when Megan doesn’t show up to accept her $25,000 award, rumors start flying. And when Savannah discovers the woman’s dead body on festival grounds, the police immediately suspect her of murder. To keep from appearing before a judge herself, Savannah sorts through the broken pieces of glass scattered around the victim for clues as to who took this killer competition too far…


This is the second in the series and for me it was my favorite one. You fall right back into the story and are pulled in from the first page. It's time for the Spinmaker Arts Festival and the town is all a buzz with excitement. But when some one is murdered and a shard of glass is what killed her, Savannah knows she has to find out who the killer is before it is time for her to be a judge at the festival. You won't want to miss this one and How fun would it be to take part in this festival. I enjoyed this book and looking forward to see what Savannah will get into next time. 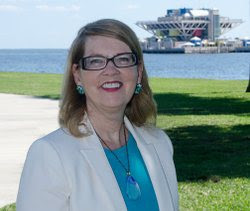 Cheryl Hollon now writes full-time after she left an engineering career of designing and building military flight simulators in amazing countries such as England, Wales, Australia, Singapore, Taiwan, and India. Fulfilling the dream of a lifetime, she combines her love of writing with a passion for creating glass art. In the small glass studio behind her house in St. Petersburg, Florida, Cheryl and her husband design, create, and produce fused glass, stained glass, and painted glass artworks. Visit her online at cherylhollon.com, on Facebook or on Twitter @CherylHollon.\