I am thrilled to be part of this blog tour. Connie Di Marco is visiting and she has a brand new book series releasing on June 8th. The Madness of Mercury (A Zodiac Mystery). 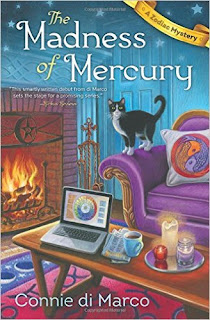 Synopsis
San Francisco astrologer Julia Bonatti’s life is turned upside down when she becomes the target of the city’s newest cult leader, Reverend Roy of the Prophet’s Tabernacle. Driven out of her apartment in the midst of a disastrous Mercury retrograde period, she takes shelter with a client who’s caring for two elderly aunts. One aunt appears stricken with dementia and the other has fallen under the spell of the Reverend Roy. To add to the confusion, a young man claiming to be a long lost nephew arrives. The longer he stays, the more dangerous things become. Is the young man truly a member of the family? Can astrology confirm that? Julia’s not sure, but one thing she does know is that Mercury wasn’t merely the messenger of the gods—he was a trickster and a liar as well.


In Connie Di Marco's brand new book The Madness of Mercury, the signs are all there that this will be a great new hit. A Fresh new cast of characters and a strong story line keep your interest peaked and keep you so involved in the story you won't want to stop reading. It keeps you guessing until the end with twist and turns. I enjoyed this one and am looking forward to what will happen next.


It’s in the Stars

You might think that an astrologer as a protagonist is an odd choice, but I liked it. That’s why I invented Julia Bonatti, a crime-solving astrologer. I’ve always loved mysteries and once I was introduced to the subject of astrology, I was fascinated. Astrology is a mystery all by itself. So I thought, why not put the two together?

Now, you may not believe in the subject. That’s okay. You certainly don’t have to, but it is amazing to look at a natal chart and make a quick observation about the character of a person. How that individual approaches life, how they appear to others, what sort of opinions and attitudes they might hold.

The natal chart is a map of your intentions at birth. It will describe the things that come easily to you, as well as those traits and skills that will or must be developed in this lifetime. The birth chart will show where you are headed on your life path. Character really is destiny, and your astrological chart is both the map and the timing of that journey.

Here’s just one example -- Saturn by transit makes a complete cycle of the natal chart every twenty-eight or so years. It’s called the Saturn return and when that planet returns to its natal position at approximately age 28 (or a little more), it’s always a significant time, a “coming of age” cycle, a time we are most free to make our own choices in life, apart from parental or societal influences. Think back on your own experiences. What happened around that time? Did you marry? Have a child? Change occupations? Get a divorce? There is both a completion of the old and a beginning of the new at the time of the Saturn return.

And astrological studies of famous people are just as interesting. Here’s one I’ve read about that has always intrigued me. Both Mahatma Ghandi and Charles Manson have similar patterns between Mars, Venus and Saturn in their charts. Could you imagine two such different people having anything in common? They each made different choices in life. Manson chose a life of evil, Ghandi chose an ascetic life devoted to freeing his country.

Does Julia use astrology in solving crimes? Yes, she does. She can tell if there’s a relationship between two individuals. She can tell when someone is wearing a mask. She knows when a client might be in danger because of a transit or an eclipse to a sensitive point in their natal chart.

Astrology is an endlessly fascinating subject and if you follow the Zodiac Mysteries, you’ll see that I try to tailor the characters to their natal horoscopes or vice versa. I may add a disclaimer that anyone born on a certain date isn’t necessarily a murderer, I don’t want to frighten anyone, and I do take liberties, but not too much. Just enough to tell a story and solve a mystery. 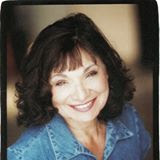 About The Author –
Connie di Marco is the author of the Zodiac Mysteries from Midnight Ink. She was fascinated by astrology at an early age and this was the inspiration that gave birth to Julia Bonatti, San Francisco astrologer and her newspaper column Ask Zodia. Writing as Connie Archer, she is also the author of the Soup Lover’s Mystery series from Berkley Prime Crime. Connie lives in Los Angeles with her family and a constantly talking cat.
Website: www.conniedimarco.com
Facebook: www.Facebook.com/ConniediMarco
Twitter: @askzodia
Pinterest: https://www.pinterest.com/Connie_di_Marco/the-zodiac-mysteries/