Happy Monday! I am excited to have Lesley A. Diehl visiting with us today. Her newest book Mud Bog Murder was released on September 1st. 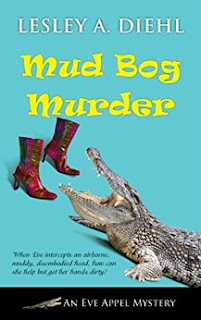 When Jenny McCleary leases her property to be ravaged by the annual mud bog races, the small rural town of Sabal Bay, Florida, is divided into warring camps: environmental activists versus monster truck fans. Jenny, who frequents the consignment store owned by Eve Appel and her friend Madeleine, doesn’t seem to mind when Eve and Madeleine join the protesters the day of the races.

During the race, Eve catches Jenny’s airborne head after it is tossed into the air by the wheels of a truck. Now every protester is a suspect in Jenny’s murder. What’s left of her alligator-gnawed body is found near the airboat business of Eve’s Miccosukee Indian friends, Sammy Egret and his grandfather. When more evidence turns up nearby, Grandfather is arrested.

Even without the disembodied head, Eve has her hands full. The town resents her role in the protests and is boycotting the consignment shop on wheels. She is torn between two men–GQ-handsome, devoted PI Alex and tall, dark, and exotic Sammy. Jenny’s sweet and needy teenage daughter is dating a petty criminal. Will Eve and Madeleine ever be able to move into their new digs? Not unless the town forgives them. And not if whoever decapitated Jenny gets to Eve before she and her sleuthing buddies solve the mystery.


I enjoyed this book, the characters are fun and a story line with plot twist that will keep you hooked until the end. With the Mud Bog races underway Eve has to clear Grandfathers name as suspect and find out who killed Jenny and why before it is to late. It's a race against the clock for this action-packed mystery.

Is this a cozy setting?

By Lesley A. Diehl
Author of Mud Bog Murder

There are numerous authors who set their stories in Florida. It’s the land of waving palm trees, white sand beaches, beautiful people in skimpy beach wear and, of course, a perfect setting for murder, a juxtaposition of tropical beauty and death. Most of the residents of the state live on the coasts, enjoying this idyllic setting. Those who travel to the state do a beach vacation or the mouse fun habitat. I live in southern rural Florida. There’s no beach sand, no bikinis, no gentle breezes, no cabana boys to hand you your mojito and no fun rides. But there are tall, lean cowboys wearing Stetsons and spurs (yes, spurs!) riding feisty little cracker horses and herding cattle. Better yet, we have alligators and all manner of other reptiles. There are limestone sink holes, swamps, sabal palms in abundance and palmetto that stretches across the Florida grasslands. This is a place known as “old Florida” where life has not changed much for decades.

I spend my winters here because I find its slow pace supportive of writing. I write humorous cozy mysteries set in this wild place. My publisher, Camel Press, just released the fourth book in the Eve Appel mysteries, Mud Bog Murder. Mud bog racing has become very popular with folks in rural Florida. They trick out a big, big, I mean humongous truck, with tires taller than an elephant and then drive it through muddy, swampy, boggy land to see who can get to the other side of the bog or as far as possible. What they do with these trucks when not driving in the mud, I don’t really know. It takes a ladder to get into the cab. This is not your usual transportation to buy groceries. I suspect they park them in their front yards as lawn decorations.

Key West has Fantasy Fest where all the women take off their tops and parade around with bare breasts, sometimes painted in lively colors or decorated with exotic designs. Do bare breasts really require this adornment? Rural Florida has mud bog racing where women also bare their breasts, but seem to do it spontaneously, like “Oh, how did that happen? I just lost my top.” The only attempt at breast decoration is mud. There’s a lot of beer drinking and partying, and the attendees seem to have great fun. And terrific hangovers as they drive those mud-covered behemoths home or to the nearest bar. You learn to give them wide berth on the road.

Before you think this form of entertainment is limited to the folks in rural Florida, I’m told that tourists and those on the coasts find these evens fascinating also. Of course, and here’s the rub: all these big machines churning through a bog is destructive of wildlife habitat and wildlife. It’s really little different from the developers who come into swampland, fill it in and build condos. Only with mud bog racing, you don’t get any permanent buildings. Only a lot of dead animals and destruction of the ecosystem.

Once I learned about bog racing, I decided this would be a place for my protagonist, Eve Appel. She would not be one of the gals participating, however. With Eve and her business partner Madeleine’s background up North as protestors against runaway development, a mud bog race was the perfect setting for them to join the protestors against the races. Yes, despite the mud, the bare breasts and the partying, there are some people who find destroying a fragile ecosystem unconscionable. Eve and Madeleine knew they were taking a chance. Their stance against the races meant they were likely to offend many in the community who saw the races as good for the economy. Since Eve and Madeleine were transplants from Northeast, the issue became one of locals against troublemaking outsiders.

There’s always something upsetting going on in Eve’s life, and Mud Bog Murder is only another chapter in Eve’s continuing aptitude for inserting herself into affairs where she may not be welcome. Usually these affairs are somehow associated with murder, and this time is no different as the owner of the land where the mud races are held is killed. By the way, Eve catches the owner’s severed head which had been churned out of the mud by the wheels of a truck. Okay, so this is a cozy with a few “ughs”.

The community in which Eve and Madeleine have set up their consignment shop business epitomizes the cozy setting, one small enough so that everyone knows everyone else and everyone else’s business. Eve’s even best friends with the lead detective on the case, Frida Martinez, who usually finds Eve’s snooping annoying, but this time she asks for Eve’s help. Eve’s gang of friends include ranchers, a mob boss, members of the Miccosukee tribe, a detective and a grandmother from whom Eve has learned her snoopy ways. I’ve used the unique aspects of rural Florida as a backdrop to murder. I believe cozies work best when they take on serious themes. I pair environmental and economic concerns with a place where people care about their way of life and insert murder into the community much as Agatha Christie created those charming English villages unsettled by a killing. The physical setting may not be familiar, but the issues of people who are Eve’s friends and opponents should resonate with readers who like their mysteries cozy with just a soupcon of yuckiness.

This is Florida as you’ve never known it, old Florida where spurs still jingle in the post office and sunset over the Big Lake is so full of color that you wonder why you never visited here before. So try a little blackened gator tail, dance some two-step in a country bar and fish for bass in the lake. Eve Appel came here from Connecticut and adopted the swamp as her home. Of course, she also found a place where she could snoop into murder and fall in love. But that’s another story. 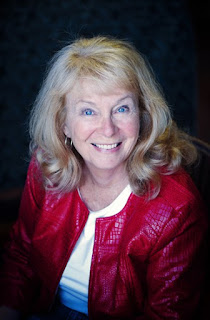 Lesley retired from her life as a professor of psychology and reclaimed her country roots by moving to a small cottage in the Butternut River Valley in upstate New York. In the winter she migrates to old Florida—cowboys, scrub palmetto, and open fields of grazing cattle, a place where spurs still jingle in the post office, and gators make golf a contact sport. Back north, the shy ghost inhabiting the cottage serves as her literary muse. When not writing, she gardens, cooks and renovates the 1874 cottage with the help of her husband, two cats and, of course, Fred the ghost, who gives artistic direction to their work.