It is a pleasure to have Ellen Mansoor Collier  with us today!

Lots of drama, choosing sides, action, and romance as they try to figure out who is trying to kill Burton and frame him for murder.
~readalot
“Gold-Diggers, Gamblers and Guns” is, in itself, a wonderful romp through another time and another place that you can take right from the comfort of your own home.
~Back Porchervations 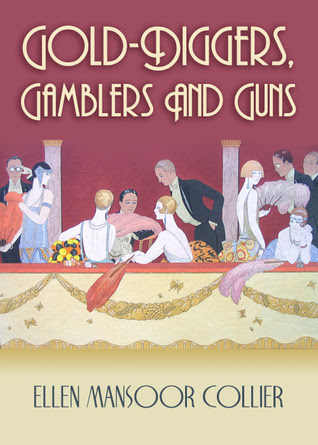 Synopsis
During Prohibition, Galveston Island was called the “Free State of Galveston” due to its lax laws and laissez-faire attitude toward gambling, gals and bootlegging. Young society reporter Jasmine (Jazz) Cross longs to cover hard news, but she’s stuck between two clashing cultures: the world of gossip and glamour vs. gangsters and gamblers.
After Downtown Gang leader Johnny Jack Nounes is released from jail, all hell breaks loose: Prohibition Agent James Burton’s life is threatened and he must go into hiding for his own safety. But when he’s framed for murder, he and Jazz work together to prove his innocence. Johnny Jack blames her half-brother Sammy Cook, owner of the Oasis speakeasy, for his arrest and forces him to work overtime in a variety of dangerous mob jobs as punishment.
When a bookie is murdered, Jazz looks for clues linking the two murders and delves deeper into the underworld of gambling: poker games, slot machines and horse-racing. Meanwhile, Jazz tries to keep both Burton and her brother safe, and alive, while they face off against each other, as well as a common enemy. A soft-boiled mystery inspired by actual events.
my review:
I enjoyed reading this series and being a fan of the 20's made it all the better.Although I haven't read the first two, I found this book to be a clever whodunit.  This book had the right atmosphere and brought you back to a time when gangsters where big. You will step back into the 20's with this classy  novel of suspense and mystery and romance you will get hooked from the start and read till the very end! 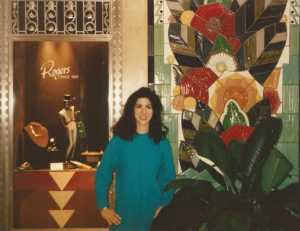 About The Author
Ellen Mansoor Collier is a Houston-based freelance magazine writer and editor whose articles and essays have been published in a variety of national magazines. Several of her short stories have appeared in Woman’s World. During college summers, she worked as a reporter for a Houston community newspaper and as a cocktail waitress, both jobs providing background experience for her Jazz Age mysteries.
A flapper at heart, she’s worked as a magazine editor/writer, and in advertising and public relations (plus endured a hectic semester as a substitute teacher). She graduated from the University of Texas at Austin with a degree in Magazine Journalism and served on UTmost, the college magazine and as president of WICI (Women in Communications).
FLAPPERS, FLASKS AND FOUL PLAY is her first novel, published in 2012, followed by the sequel, BATHING BEAUTIES, BOOZE AND BULLETS, released in May 2013. She lives in Houston with her husband and Chow mutts, and visits Galveston whenever possible.
“When you grow up in Houston, Galveston becomes like a second home. I had no idea this sleepy beach town had such a wild and colorful past until I began doing research, and became fascinated by the legends and stories of the 1920s. Finally I had to stop researching and start writing, trying to imagine a flapper’s life in Galveston during Prohibition.”
Author Links:
Website: http://www.flapperfinds.com/
Facebook: https://www.facebook.com/ellen.mansoorcollier?fref=ts
Amazon: http://www.amazon.com/Gold-Diggers-Gamblers-Guns-Jazz-Mystery-ebook/dp/B00KF3TJCM/ref=sr_1_1?s=books&ie=UTF8&qid=1401823006&sr=1-1&keywords=ellen+mansoor+collier
GoodReads: https://www.goodreads.com/author/show/6452242.Ellen_Mansoor_Collier
Purchase Link:
AMAZON

Thank you for being here today, I hope if you haven't read this book you would pick it up and do so!