It's time for another First in a New Series and this week's First was Just released on October 7!! 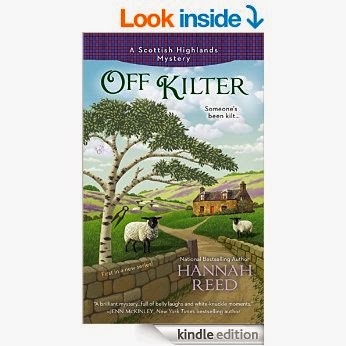 Publication Date: October 7, 2014
National bestselling author Hannah Reed brings mystery lovers the first in a brand-new series, in which a young writer finds herself swept up in a murder amidst the glens and lochs of the Scottish Highlands…

After the recent death of her mother and the dissolution of her marriage, thirty-something Eden Elliott is seriously in need of a fresh start. At the urging of her best friend, bestselling author Ami Pederson, Eden decides to embark on an open-ended trip to the picturesque village of Glenkillen in the Scottish Highlands, to do some hands-on research for a book of her own. But almost as soon as Eden arrives in the quaint town, she gets caught up in a very real drama…

The town’s sheep shearer is found murdered—clipped with his own shears—and the locals suspect Vicki MacBride, an outsider whose father’s recent death left her the surprise heir to his lucrative sheep farm. Eden refuses to believe the affable heiress is a murderer, but can she prove that someone is out to frame her new friend before she finds herself on the receiving end of more shear terror?

If you haven't gotten this book yet check it out here: