Happy Monday! So glad to be part of this blog tour. Death and the Red Headed Woman by Loretta Ross was a great  read. Leave a comment and email for a chance to win a copy of this book!

Welcome Loretta, I am excited for this book and know other readers will love it too. 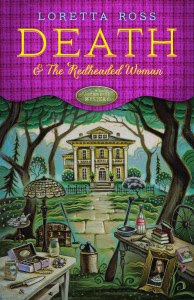 Death and the Redheaded Woman
(An Auction Block Mystery)

Synopsis
Auctioneer Wren Morgan is cataloging the contents of the Campbell house, an ante-bellum mansion with a Civil War-era lost jewels legend. She was hoping to find something interesting, but the naked dead guy on the stairs is an unwelcome surprise. When the body turns out to belong to a small-time criminal with ties to a more recent jewel heist, Wren suddenly finds herself face-to-face with Death.
Death Bogart (pronounced “Deeth”) is a disabled Marine combat vet, down on his luck and trying to start over as a private eye and part-time bounty hunter. The stolen jewels he’s searching for are the final evidence needed to convict a murderer — and the reward money could turn Death’s life around.
In Wren, Death finds a friend and a willing ally — someone to help him learn to overcome his new physical limitations, and possibly even a second chance at love. But Death and Wren aren’t the only ones searching for treasure. Two ruthless men are also on the hunt, and they will do anything to eliminate the competition. To survive, Death and Wren will have to solve two mysteries spanning a century and a half and outwit a pair of cold-blooded killers.
My Review:
Wren and Death are great characters that really bring this story to life, you will be intrigued and captivated.  Loretta Ross has a hit with this page- turner. She holds your interest until the end and makes you want more. I am eager to see where Wren and Death will go next.
Guest Post :
Hello, Shelley! Thank you so much for inviting me to visit your blog today.
My first book, Death and the Redheaded Woman, is a cozy mystery about the adventures of redheaded auctioneer Wren Morgan and Death (pronounced "Deeth") Bogart, a disabled Marine combat vet turned private eye and part-time bounty hunter. I thought you might be interested in the story behind why I made Death a former member of the Corps.
Jerry Dean Hicks, one of my nine half-brothers, was fifteen years older than I. I was only three when he joined the Marines and was sent to Vietnam. My early memories of him are sketchy at best. In his absence, a big teddy bear he'd given me (Jerry Bear) stood as his avatar. He was a distant ideal -- strong and brave and not entirely real. A proud young man in a dress-blue uniform in a picture in the Camp Pendleton yearbook. A fun almost-stranger who got leave one Christmas and showed up unexpectedly.
Someone taught me the words to the Marine Corps Hymn and I remember perching on top of my swing set and singing them to the summer sky. I told people proudly that my big brother was a Marine.
War is not kind to anyone. Indeed, if war is anything, it is unkindness made manifest. Jerry was wounded in action twice, but I believe his deepest wounds were ones that left no physical scars.  He returned a troubled young man to a troubled nation, cast off his medals, grew out his hair and joined the peace movement.
I saw him briefly when I was in my mid-teens. He hitchhiked across country, from Oregon to Missouri, with a big hound dog named Lady for a companion. He looked so different, a long-haired hippy in ragged denim, that Mom didn't even recognize him at first.
We thought that he had come home to stay, but he was struggling with addiction and alcoholism. He found it difficult to hold down a job and, before long, he returned to the West Coast.
I didn't see Jerry again until the spring of 2000, when our mother suddenly passed away. For the first time we met and talked as two adults. I liked him. He was intelligent and funny and warm and kind. If our ages, and war, and distance hadn't intervened, I think we could have been really close. He'd fallen in love with a woman named Bobbie and with her help he'd gotten clean and sober. He worked for the Oregon Department of Conservation. He and Bobbie ran a private, no-kill animal shelter from their home in Deadwood, Oregon and he was active in raising awareness of those soldiers who are still MIA/POW, and the quest to bring them home.
Tragically, he'd lost Bobbie to a brain tumor less than a year before Mom died.
A couple days after the funeral I drove him to the airport and we hugged goodbye with promises to stay in touch and visit more. Life, however, intervened, and that was the last time I saw him. He kept up the animal shelter for as long as he could, but a few years later he was diagnosed with Parkinson's and in October of 2011 he passed away. He was just over a month shy of his 61st birthday.
And...I never really knew him. But looking back on his life now, I have tremendous compassion for that idealistic young Marine and for the troubled man that war twisted him into. And I have tremendous respect for the strength with which he overcame the obstacles in a difficult life and the grace and dignity with which he lived out his final years.
That's why, when I was writing Death Bogart, I chose to make him a former Marine. Now, mind you, Death is not Jerry. But he wore the uniform as an homage to Jerry.
And if the Army and the Navy/ should ever look on Heaven's scene/ they will find the streets are guarded by/ my United States Marine. 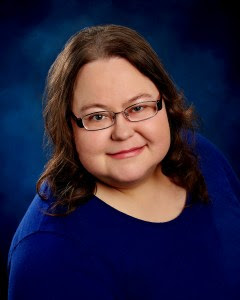 About This Author
Loretta Ross is a writer and historian who lives and works in rural Missouri. She is an alumna of Cottey College and holds a BA in archaeology from the University of Missouri – Columbia. She has loved mysteries since she first learned to read. Death and the Redheaded Woman will be her first published novel.
My Website is at http://www.lorettasueross.com.
My blog is connected to my website athttp://lorettasueross.com/blog/
My Facebook page is at https://www.facebook.com/lorettasueross
My author page at Goodreads is athttps://www.goodreads.com/author/show/236665.Loretta_Ross
I’m on Twitter as @lorettasueross and my profile page is at https://twitter.com/lorettasueross
Purchase Links:
Amazon