Happy Monday! I'm excited to have Wendy Tyson here today. Her new book Dying Brand is out and you won't be disappointed.

A cozy mystery with colorful characters and plenty of suspense, Dying Brand by Wendy Tyson, the third installment in her Allison Campbell Mystery series, is as tautly written as a thriller and full of deception, betrayal and emotional angst.
~Queen of All She Reads 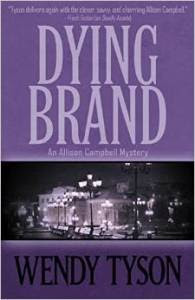 When image consultant Allison Campbell attends an award ceremony to honor a designer friend, she’s thrust into a murder investigation. Only this time, it’s personal.
A former boyfriend is dead, slain on the streets of Philadelphia. His widow claims he was meeting with Allison, yet Allison hadn’t spoken to him in years. Nothing about his death—or life—makes sense. When compromising photos from their past arrive at Allison’s office, they raise more questions than they answer.
Driven to find justice, Allison deconstructs the image her ex had created for himself, looking for clues about the man he’d become. As her hunt for the truth unveils secrets, Allison’s past and present collide—with deadly results.

My review:
Dying brand is the third in the series and it really keeps you on the edge of your seating. The characters and the story line are so well developed. Her writing makes you feel like you are right there with Allison as she tries to find out who the killer is. I enjoyed this book and can't wait to find out what is next for Allison and her friends.  Don't let this whodunit pass you by. You will be hooked from the start.
Guest Post:
Great Escapes Guest Post
Wendy Tyson/DYING BRAND
An Unlikely Detective

In the world of mysteries, even cozy mysteries, Allison Campbell is an unlikely detective. As a professional image consultant on the wealthy Philadelphia Main Line, Allison spends her days helping people reinvent themselves, but her best transformation was her own. Her clients—ambitious executives, the recently-divorced, women returning to the workforce, celebrities, local politicians and victims of corporate-downsizing—see a sophisticated and savvy advisor, someone who can help them better navigate an ever more image-conscious world. Although she’s viewed by most as an insider in a world of insiders, Allison is really an outsider. And it’s her experiences as an outsider—coupled with her background in psychology—that make her good at her job (and solving crimes).
Born in a small town outside of Philadelphia, Allison is one of three daughters. She grew up poor, and her mother suffered debilitating headaches throughout Allison’s childhood, leaving her and her sisters in the hands of a mentally abusive father. Allison escaped to go to college and, later, graduate school for psychology, but in her mid-twenties, her world fell apart. Left with nowhere to go and no one to turn to, Allison Campbell hit rock bottom. She had no choice but to reinvent herself, and she did.
Despite her eventual success, the old Allison, the one who never quite fit in, is always lurking just beneath the surface. In KILLER IMAGE, the first book in the series, the tragedy that led to Allison’s undoing haunts her, and while she likes the tidy, predictable life she’s created for herself, that neat life—along with an illusion of safety—is shattered. Allison grows over the course of the series, and by the time we meet her in DYING BRAND, she’s more comfortable with change and uncertainty. Again, though, events challenge her world view. In DYING BRAND, Allison needs to rely on her inner strength and resourcefulness in order to deconstruct the past of a former lover so that she can fix her own life and help those around her.
In a recent interview, the Campbell series was compared to television shows in the pop culture “fixer” genre, shows like Scandal and Ray Donovan, and I was asked why audiences are drawn to these types of books and programs. My answer—that these shows dig deeper into the “why” of things, especially into why people do awful acts—is also one of the reasons I chose to write about an image consultant. The whole concept of image, of things not being quite what they seem, appealed to me. When I was first creating the main character behind the Campbell series, I envisioned someone who could move in a world of wealth and power, but who would not get completely caught up in it. Someone who could understand what it means to create (and deconstruct) a façade, but who was still vulnerable. Someone who could be a true opponent to those who play mind games, who use power and intelligence to their benefit and to the detriment—and even demise—of others. I wanted a main character who could dig into the “why” of things and come out ahead.
In the end, I decided on a woman schooled in psychology, a woman with demons of her own who could see beneath the surface—and thus, Allison was born. I’ve since realized that a well-connected image consultant living and working on the Philadelphia Main Line can find herself involved in quite a few adventures. In fact, look a fourth installment in the series, VICIOUS LOOKS, next summer. 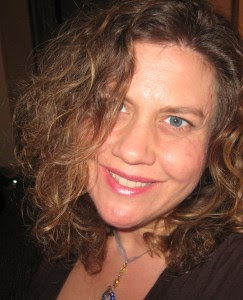 About This Author
Wendy Tyson is an author, lawyer and former therapist whose background has inspired her mysteries and thrillers.  Her latest novel, DEADLY ASSETS, the second in the Allison Campbell mystery series, was released on July 22. The first Campbell novel, KILLER IMAGE, was named a best mystery for book clubs in 2014 by Examiner.com and the third Campbell installment, DYING BRAND, is due to be released on May 26.  Wendy lives on a micro-farm near Philadelphia with her husband, three sons and two muses, dogs Molly and Driggs.