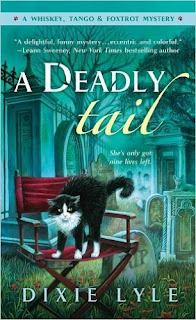 Deirdre "Foxtrot" Lancaster returns-with her otherworldly animal companions Whiskey and Tango-to shine a light on the dark side of fame...

Foxtrot has seen a lot of strange things as assistant to billionaire Zelda Zoransky at her wacky mansion. And that includes her telepathic cat Tango and ectoplasmic pooch Whiskey. So it's no surprise to find a horde of zombies lurching across the lawn-even if they are just actors in a horror movie that's filming on the mansion grounds. The special effects look pretty convincing. But all that fake blood doesn't fool Whiskey, who quickly sniffs out the truth: one of those corpses is real...


Before you can say, "Lights, camera, murder," Foxtrot and her furry partners-in-crime-solving are caught up in the drama of who-killed-who...and why. With a crazy cast of characters including a neurotic director, a star-hungry diva-even with an appearance by Lassie's ghost-it's bound to have one hell of a twist ending. But first, Foxtrot and her supernatural sidekicks have to find a killer amongst them-before the whole case is a wrap...in the next Whiskey, Tango, Foxtrot novel from Dixie Lyle. "A clever new series that deftly blends cozy mystery with the paranormal...original and witty."-Ali Brandon, author of the Black Cat Bookshop mysteries

Dixie Lyle, author A Taste Fur Murder, To Die Fur, and Marked Fur Murder from the Whiskey, Tango and Foxtrot Mysteries from St. Martin's Books, loves animals, mysteries, books, reading, words, bad puns (are there any other kind?) and once had a torrid summer romance with an entire library. Did I mention the books? Oh, and definitely doesn't believe in the supernatural. Nope, not me. Hey, what was that sound? Where's that spooky green glow coming from? Oh, hello, didn't see you standing there in the corner, what with you being all see-through and everything. Want a cup of tea? Moan once for yes, twice for no. Allegations that Dixie Lyle has a goofy sense of humor are entirely unfounded, and should be forwarded to the unfounded and unlost department.