It's time for another fun blog tour. I am excited to have been apart of this one. Mrs. Odboddy Hometown Patriot by Elaine Faber was released on January 15th,2016. 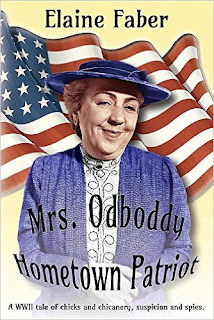 Since the onset of WWII, Agnes Agatha Odboddy, hometown patriot and self-appointed scourge of the underworld, suspects conspiracies around every corner…stolen ration books, German spies running amuck, and a possible Japanese invasion off the California coast. This seventy-year-old, model citizen would set the world aright if she could get Chief Waddlemucker to pay attention to the town’s nefarious deeds on any given Meatless Monday.

Mrs. Odboddy vows to bring the villains, both foreign and domestic, to justice, all while keeping chickens in her bathroom, working at the Ration Stamp Office, and knitting argyles for the boys on the front lines.

Imagine the chaos when Agnes’s long-lost WWI lover returns, hoping to find a million dollars in missing Hawaiian money and rekindle their ancient romance. In the thrilling conclusion, Agnes’s predictions become all too real when Mrs. Roosevelt unexpectedly comes to town to attend a funeral and Agnes must prove that she is, indeed, a warrior on the home front.

In Elaine Faber's brand new series Mrs.Odboddy Hometown patriot you will meet a fun and witty cast of characters, a fresh new story and enjoy hours of fast-paced humorous reading. A page-turner that will keeping you wanting more. 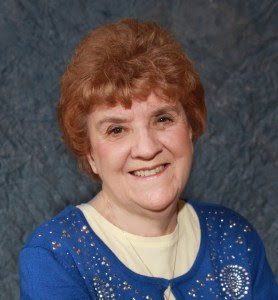 About the Author:
About The Author –

Elaine is a member of Sisters in Crime, Inspire Christian Writers and Cat Writers Association. She lives in No. Calif with her husband and four house cats (the inspiration for her three humorous cozy cat mysteries, Black Cat’s Legacy, Black Cat and the Lethal Lawyer, and Black Cat and the Accidental Angel).

Mrs. Odboddy’s character is based in no way on Elaine’s quirky personality. Two more Mrs. Odboddy adventures will publish in the near future. Many of Elaine’s short stories have appeared in magazines and multiple anthologies.