I am excited to have John Valeri as our Halloween host this week.His debut book was released on August 31st. Leave a comment and email below for a chance to win a copy of Tricks and Treats, 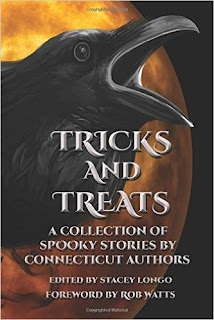 I am a fall freak.


As anybody who knows me can attest, I count down the days until pumpkin returns to Dunkin’ Donuts—and can usually snag my first cup before the end of August (and before the powers that be officially announce its resurrection). I also make entire meals from apple fritters, frequent haunted attractions, cloak myself in neon orange as often as I can get away with it, and read/watch scary things with a perverse sense of glee that some people seem to find disturbing.

So it’s only fitting that I make my debut as a fiction author in Tricks and Treats: A Collection of Spooky Stories by Connecticut Authors (Books and Boos Press)—a new seasonally-themed anthology featuring two of my contributions.

The first, “Just Cause”, is about a convict who goes missing—and the feisty prosecutor, Nevia Hastings, who put him away for murdering his wife, despite the conspicuous absence of a body. Hastings is a not-so-subtle ode to my childhood hero (and unlikely adulthood friend) Marcia Clark, who transcended “Trial of the Century” infamy to write brilliant crime novels. The story is part courtroom drama and part after-dark mayhem—and it’s got an ending that I hope defies expectation.

My second entry, “Blood Relations”, revisits the quiet suburban town of Greensboro one year after the unsolved murder of seventeen-year-old Amanda Pritchard, who was stabbed to death in her bedroom on Halloween night. It was conceived as an homage to Scream, which sparked my love of horror movies, and hopefully captures the essence of that film by virtue of its zany characters, snappy dialogue, and intense scenes. And yes—there’s a killer on the loose (though the only mask he/she hides behind is deception).

The remainder of the anthology is rounded out by classic and contemporary authors from the Nutmeg state whose tales range from the humorous to the truly horrifying. (As an aside: Who’d have thought I’d be published alongside Mark Twain? Somewhere, he’s turning over in his grave.) The latter group includes Melissa Crandall, Dan Foley, Stacey Longo, G. Elmer Munson, Kristi Petersen Schoonover and Ryanne Strong, several of whom I am fortunate to call friends.

Obviously, my opinion on the project is a bit biased (so I won’t give it)—but I’ll leave you with these words from Michelle Garza of This Is Horror (UK): “This collection brings with it all the trappings of the season, from pumpkins and spooky decorations, to that chill coursing over your skin in the night, and the lingering sense that death has come to claim many things, possibly the reader as well.”

So … go grab yourself a cup of pumpkin coffee (or the adult beverage of your choice), sit back, and prepare to be claimed. 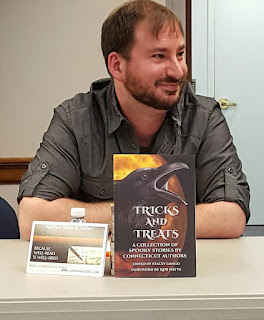 John Valeri was an independent contractor for Examiner.com from 2009 to 2016. His Hartford Books Examiner column consistently ranked in the top ten percent of all Hartford, National Books and National Arts & Entertainment Examiners. John currently contributes to The National Book Review, The News and Times, The Strand, Suspense Magazine, and CriminalElement.com. He regularly moderates author interviews and book discussions at bookstores, conferences, and libraries throughout Connecticut; he has also appeared on television and radio. John made his fiction debut in Tricks and Treats, a Halloween-themed anthology published by Books & Boos Press in September. Visit him online at www.johnbvaleri.com.
at October 19, 2016