I am delighted to be part of this blog tour. Sweet Pepper Hero( A Sweet Pepper Fire Brigade Mystery) by J.J.Cook was released on January 5th. Want to win a copy of this book? (US only) Leave a comment and email for a chance. 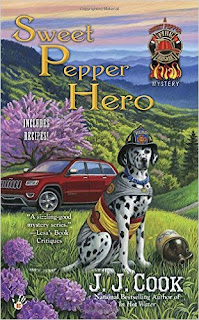 Synopsis
Old rivalries heat up in the fourth Sweet Pepper Fire Brigade mystery from the national bestselling author of In Hot Water.

Fire chief Stella Griffin has been put in charge of judging the annual recipe contest, but Eric—her resident ghost and true culinary genius—has vanished. Before she can track down his latest haunt, she’s called in to investigate a local moonshine distillery that was set ablaze, making her realize there’s more than pies and cakes cooking in Sweet Pepper.

As rumors of a revived whiskey war ignite, Stella turns to the town’s elders to help her find answers. The past might have some clues as to what has sparked the present fires. But when following a lead lands her in buried rubble, Stella realizes she must extinguish this case fast or she might be going down in flames.

Some mysteries are so good that when they are released you drop everything to read them. For me this is one of those mysteries.I love visiting with Chief Stella and the fire house in Tennessee. It is always a welcoming place and the characters are friendly and make this story one you will want to be involved in.

With the recipe judging contest going on and not knowing where Eric went off to and trying to make peace Stella has a lot on her plate. When the moonshine distillery explodes from arson she puts things on hold to find out what happened and resume normal business.

The characters are so well developed and the story is strong and captivating.

J. J. Cook is a pseudonym for a married couple who writes mysteries, mostly set in the South, with a touch of paranormal and romance.
at January 14, 2016