First in Series- One Bad Apple by Sheila Connolly

Happy Monday! It's time for this week's First in Series. One Bad Apple (An Orchard Mystery) by Sheila Connolly was released on August 5th, 2008. 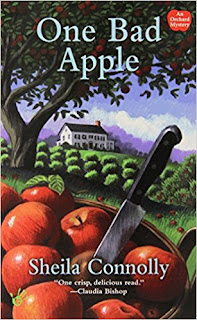 
There's a killer in the orchard? and he's rotten to the core.

Meg Corey has come to the quaint New England town of Granford, Massachusetts, to sell her mother's old colonial home and apple orchard. Instead, she becomes embroiled in development plans that include her land and her former flame from Boston. When he's found dead in the new septic tank on her property, the police immediately suspect Meg, whose only ally in town is the plumber Seth Chapin. Together, they'll have to peel back the layers of secrecy that surround the deal in order to find the real murderer and save the orchard. 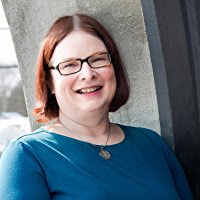 After collecting too many degrees and exploring careers ranging from art historian to investment banker to professional genealogist, Sheila Connolly began writing in 2001, and has now published eight traditional mysteries. Now a full-time writer, she thinks writing mysteries is a lot more fun than any of her previous occupations.

She wrote her first mystery series for Berkley Prime Crime under the name Sarah Atwell, and the first book, Through a Glass, Deadly (March 2008), was nominated for an Agatha Award for Best First Novel; Pane of Death followed in November 2008, and Snake in the Glass in September 2009.

Under her own name, Connolly writes the Orchard Mystery Series (Berkley Prime Crime), set in western Massachusetts, where she had generations of ancestors. In fact,the series is set in a house built by one of her 7th great-grandfathers. The series debuted in 2008 with One Bad Apple, followed by Rotten to the Core (2009), Red Delicious Death (2010), A Killer Crop (2010), and Bitter Harvest (2011). Sour Apples appeared in August 2012 and was a New York Times bestseller.

Connolly's second series, the Museum Mysteries (Berkley Prime Crime), takes place among the many museums of Philadelphia. Fundraising the Dead came out in October 2010, Let's Play Dead in 2011, and the third, Fire Engine Dead, in March 2012. The fourth book, Monument to the Dead, came out in June 2013. Since she worked for several years at a major historical institution in Philadelphia, she can present a lot of behind-the-scenes details of the cultural scene there.

Connolly's third series, the County Cork Mysteries, opened with Buried in a Bog in February 2013 and it went to #14 on the New York Times Mass Market Bestseller list. This new series features a Boston-reared American woman who finds herself running a pub in a tiny village in West Cork. Connolly's grandfather was born in that region, and there used to be a wonderful pub called Connolly's in Leap.

Connolly's first full-length, standalone ebook, Once She Knew, was published by Beyond the Page in October 2012. Her second, Relatively Dead, came out in May 2013.

Connolly has also published short stories: "Size Matters" appeared in the 2010 Level Best Anthology, Thin Ice; "Called Home," a short prequel to the Orchard series, was published by Beyond the Page in 2011; and "Dead Letters," an e-story featuring the main characters from the Museum series, will be published by Berkley Prime Crime in February 2012. Beyond the Page also published "The Rising of the Moon," and another Level Best anthology includes "Kept in the Dark," which was nominated for both an Agatha award and an Anthony award for 2013.

She lives in a too-big Victorian in southeastern Massachusetts with her husband and two cats. Find out more about her at her website, www.sheilaconnolly.com